Our Trees and Wildlife 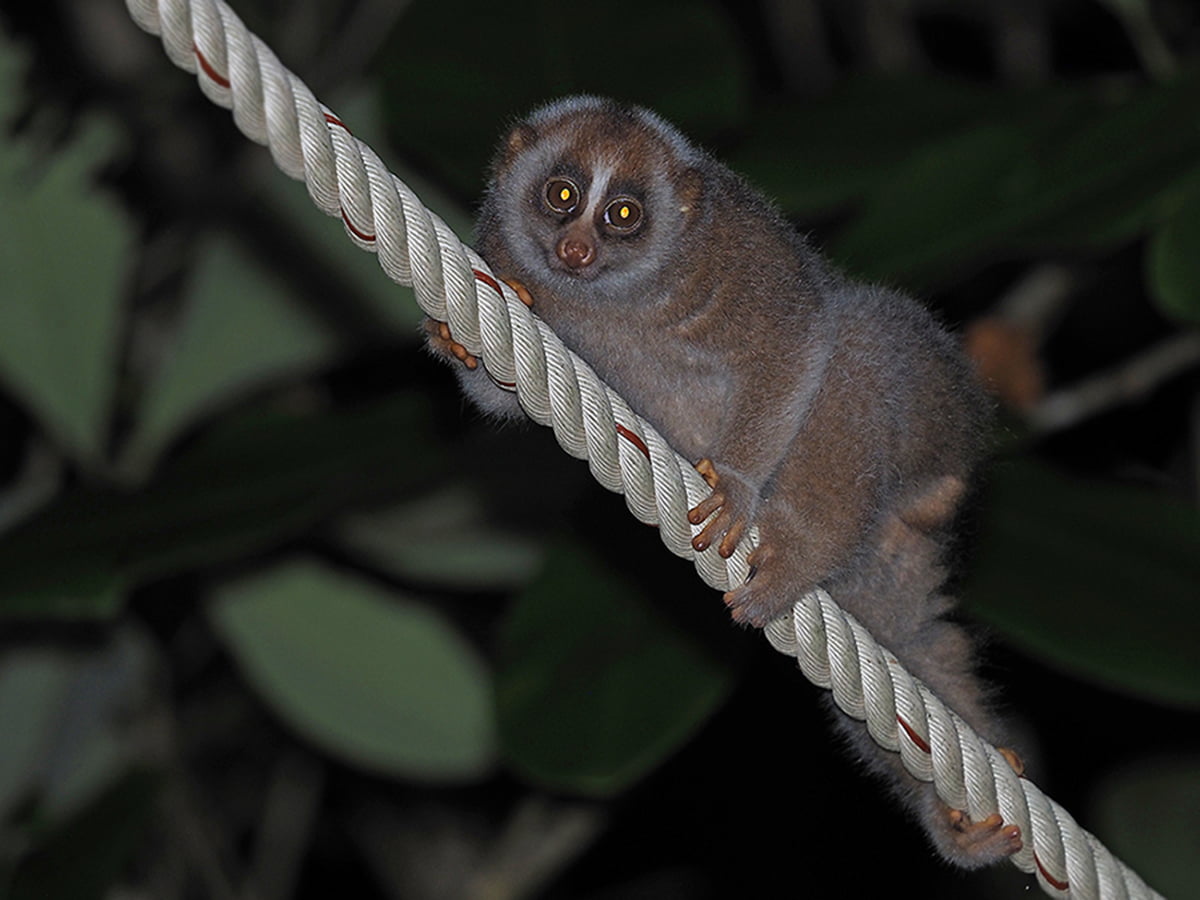 What are slow lorises?

Imagine a small, fluffy, slow-moving primate with long arms and legs, large round eyes, and a gothic eyeshadow and you have got yourself a slow loris. These funny looking animals are one of the most elusive and endangered native residents of Khaolak Merlin Resort. They are nocturnal, only active at night, and for the most part, like to live by themselves or in a small family group in their own territory, hidden high up in the foliage. Most special of all, they hold the title of being the only venomous primate in the world. Don’t worry, they won’t get near humans and would only bite in self defense.

Sadly, their secret weapon is no match against illegal pet trade. Their cute features made them a highly sought after species in both the exotic pet community and the tourist industry. This article serves as an introduction to the residential slow lorises at the resort and a plea for you to help us spread the words about the slow loris in hope that by educating others about the plight of illegal wildlife trade, we can be a part of a solution to help curb the demand for slow lorises in the market.

With the help of a graduate student from Oxford Brookes University, Luke Quarles, and his advisor, Dr.Anna Nekaris (an expert on all things slow lorises), we were able to identify four individuals at the resort, with a fifth individual sighting in November 2022 that have yet to be confirmed by the researchers! The research suggested that they are from the same family group. When this article was written in 2022, there were three adults, one juvenile, and one baby that stayed with the mom. They spread out all around the hotel and have been sighted near the lobby, next to the pool near the Veranda, behind the spa building, and up on the tree near the private villas.

There are five species of the slow loris throughout Southeast Asia but only two species, Bengal and the Sunda slow lorises, are native to Thailand. Although it is likely that the individuals residing at Khaolak Merlin Resort are Bengal slow loris, no genetic testing has been done to verify this.

What’s in a name?

Although the slow loris have earned the name “slow loris” in English, likely from the way they normally move, they can be strikingly fast, disappearing into the foliage in a blink of an eye, earning them the local name of “Ling-Lom (wind monkey)” or “Ling-Phee (ghost monkey)”. In most parts of Thailand, they are more commonly known as “Nang-Eye (shy lady)”, owing to their tendency to curl up and hide their face when spotted. 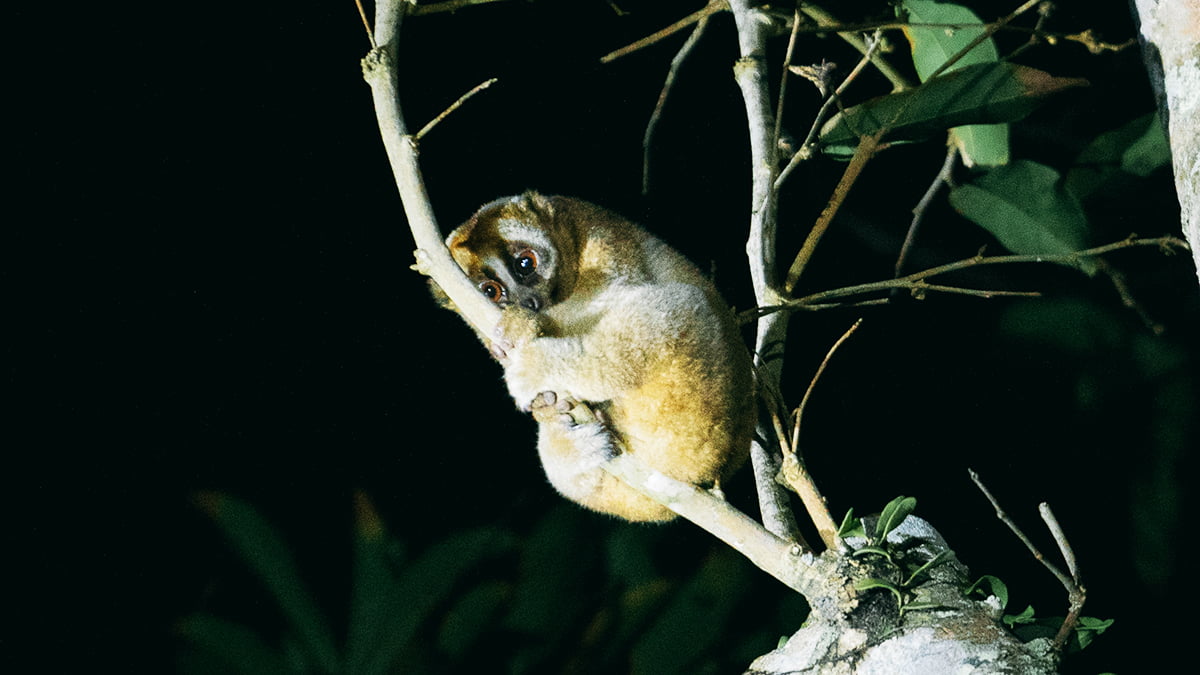 Night time is the right time.

As mentioned above, slow lorises are nocturnal, their big eyes have a specialized adaptation called tapetum lucidum, which is the reflective layer in the eye that allows for nocturnal vision, and creates eye shine from a spotlight. It is this eye shine that allows us to find them in the dark. If you had a chance to join us in our Night Safari activity, you would see the guide use a red flashlight to scan the treetops for any sign of two tiny reflective red dots in the tree. At Khaolak Merlin Resort, being respectful to native wildlife is our priority, so we only allow the use of red flashlights to find lorises because they are the only spectrum that doesn’t bother the sensitive  lorises’ eyes.

Slow lorises are actually omnivore, they eat a mixed diet of meat and plants. They like to eat insects like slugs and bugs, and also like eating tree gum, fruit, leaves, and eggs that they take from birds’ nests. At Khaolak Merlin Resort, you can sometimes find them hanging out in big fruit trees near the lobby, arguing with fruit bats, fighting over a ripe fig. If you are walking by the spa at night, you may notice seeds being thrown out of a tree at you by some mischievous little lorises. And if you are lucky enough to spot a loris at night near one of the lamps, you may even get to see it catch a bug! 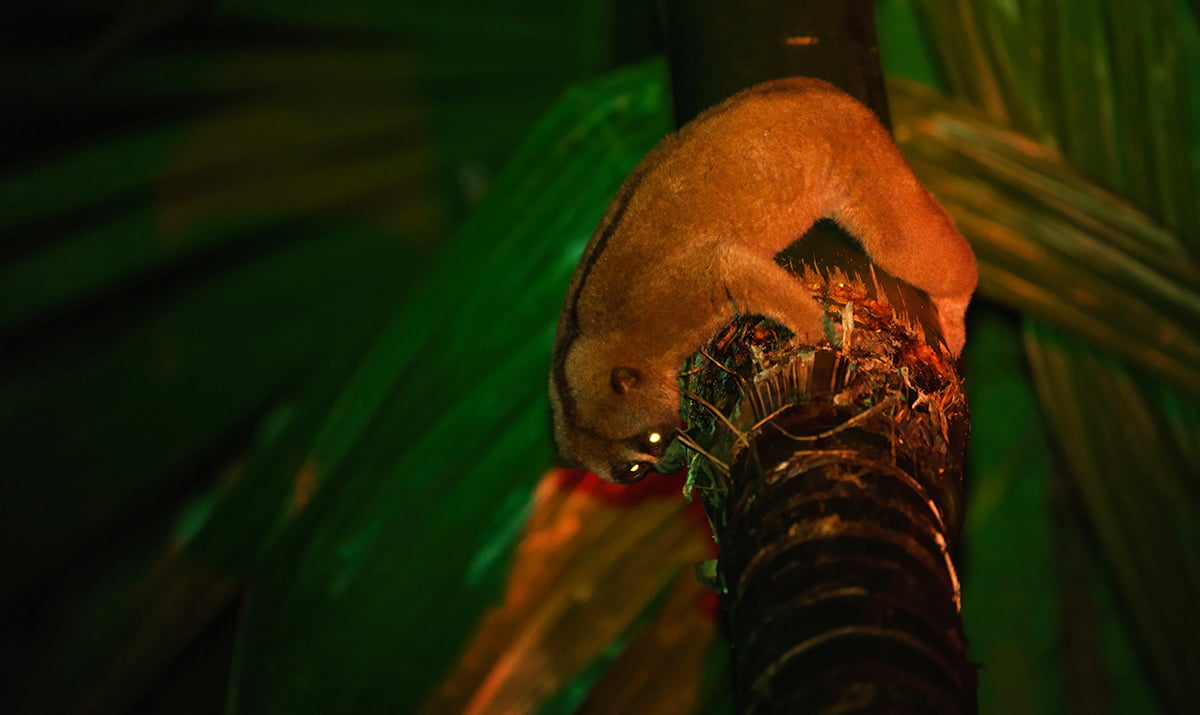 The rise of social media and selfies with exotic animals, coupled with the threat from deforestation, put the slow lorises at higher risk than ever. Everybody wants a cool picture to post on a social media platform and unfortunately, this fuels the illegal wildlife trade, with many wild animals captured from the forest being used as photo props in touristy destinations.

The slow loris pet craze started when videos of a pet slow loris getting “tickled” and responding by raising their arms went viral. There’s an interesting fact most people don’t know about the slow loris. It might look like he’s enjoying the tickle in the video, but it’s actually a stress response.

This brings us back to the “only venomous primate in the world” title. Slow lorises have venom glands under their arms and when threatened, they raise their arm to lick the venom and store it in their mouth before they bite. The severity of the bite depends entirely on whether the person is allergic to the venom or not. Knowing this risk, most traders would cut the lorises’ fangs before putting them on the market, leading to serious health issues and infections. And even though the baby slow loris may seem harmless, their instinct often kicks in when they become sexually mature. Inevitably, an accidental bite occurs, ending in abandonment of pet slow lorises that cannot be returned to the wild.

What can you do to help?

Believe it or not, you are already helping by staying with us at Khaolak Merlin Resort and reading this article! We partnered with Love Wildlife Foundation and frequently host researchers who work to protect Southeast Asia’s biodiversity and conserve the slow loris and their friends. However, you can help us even more by supporting the gift shop, spreading the word about the slow loris, and making a pledge to not support the use of wild animals as photo props or keeping one as a pet.

Cookies are little bits of textual information which are used by the website to enhance user experience. Accept all cookies or choose which categories you want to allow.